„Production is sacred, it cannot break down”

Schipper Technisch Serviceburo (STS) now has five STYLE machines. It was time we visited this customer for a good conversation. After a friendly welcome and a good cup of coffee, we join Marco Wolters, operational manager at STS. Marco immediately tells about the history of Schipper Techniek and the associated STS.

Schipper Techniek is truly a family business. Started in 1981 with the aim of relieving companies technically. They have become a household name in Twente with no fewer than 3 BV’s, 5 branches and their own employment agency. This allows Schipper to take care of all their customers’ concerns. There are currently 128 permanent employees divided over these companies. Back to STS: “In 1998 Schipper Technisch Serviceburo was founded in order to be able to offer an even broader service package. The focus was on Service and Maintenance and at one point more than 60 people were at work ”, says Marco. The company has since been divided into four separate disciplines: machine building, machining / construction, process technology and Service / Maintenance. All these disciplines are intertwined and turning and milling work is necessary everywhere to be able to work efficiently. “At the time, we started the machining department very small. The machining department was part of our Service and Maintenance department, ”says Marco. „We started with three conventional banks that we had to do with.”

At a later stage, the first CNC machining centers were added, but second-hand because our vision is: “earn first and then spend”. After a number of years, defects appeared with the controls and the question was asked: What next? “Look, the machines are allowed to stand still, not be too expensive and we don’t want to buy misery from someone else”, says Marco. 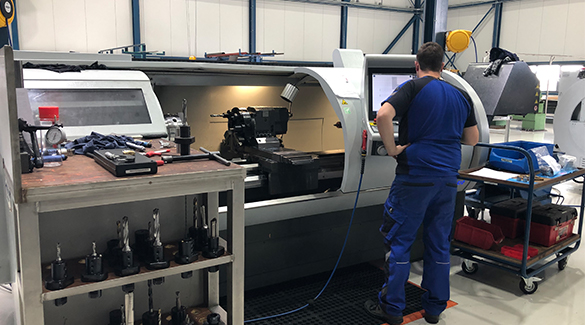 In 2008 the current building became too small and no more growth could be realized, simply due to lack of space.

At the end of 2008 and early 2009, a new hall was realized and the first BT 1500 from Style was purchased. After this, everything accelerated and further investments were made in the next two machines. The choice was not that difficult, we had good experience with Style and they had also developed enormously in recent years. A 510 CNC lathe was purchased at the same time as an MC1000 machining center. This was a big step forward. Within six months, another 550 CNC lathe was purchased because the demand only increased. Due to this enormous growth, STS also had to find personnel, which was also a challenge. We have now hired a new CNC topper who is also learning how to mill. “Fortunately, the machining department is now fully occupied, the machines are barely standing still,” says Marco. Soon there will even be a 5th CNC employee in the beautiful new hall.

Schipper Technisch Serviceburo is a flat organization where you can apply very easily and within one minute. Marco indicates that if you speak to someone on the phone, you will soon enough know whether someone will fit. „We like” not cocks, but cocks „!” Thanks to an internal training center and various product training courses in which the attainment of diplomas is stimulated, all employees are professionally versatile. The planner knows exactly who can be deployed where.

When asked why they ultimately chose STYLE machines, Marco is clear. “We mainly do special work, urgent jobs, small series and many single pieces. The strength of STS is simply: do what you say, which is why STYLE fits so well here. We have the same mindset. Customers can call us 24/7 for work, we will deal with it immediately and ensure that the fault is resolved quickly. This also happens if we have a question about the machine or control system. ” Marco is also positive about the machines and controls: “STYLE is super easy and accessible. I also personally think they are the most beautiful machines that are for sale. The bandwidth of the machine is also very large, so you can do a lot with it. It is very easy to teach the method to a student and they take over whistling. The screen is simple, everyone is used to Windows and the Touch works quickly and efficiently. ”

In the meantime, another new hall has been built that is completely focused on our machining department. Two more machines were also purchased last year. An MC 1500 machining centers and a 510 CNC lathe for emergencies and emergencies. “This is a smaller model that allows us to offer more variety to our customers,” said Nick. Nick also wants to demonstrate the simplicity of STYLE: “programming is very easy, with 100 small axes you have to be able to change quickly and this is quick and easy to learn with the STYLE control. We share the same vision and that’s why it works so well! ”